Interacting with People with Disabilities

Preparing yourself, your team, and your facilities for meetings, events, and conferences that are accessible to those with disabilities will likely result in delivering even better customer service and a better experience for all attendees. To be better prepared, you will want “soft skills” to support your event in addition to the structural, technological, and other physical elements needed for accessibility. The Guide authors recommend the following resources:

The Market Case for Accessible Events, Meetings and Conferences

While the U. S. Department of Labor (opens in a new window) estimates that individuals with disabilities control more than $200 billion in discretionary spending, this figure is likely much less than the true market power of all individuals with functional needs to be accommodated. This is due to vast under¬-reporting on official surveys, census documents, and employment documentation (where it is voluntary to disclose a disability).

In fact, many Americans who would be best served by a fully accessible meeting, event, or conference environment may not identify their needs as representative of a disability. This is especially true today, when there is a ground swell of individuals with a wide range of emerging functional needs that will force businesses to meet them where they are, or will find other vendors who can. In the age of social media, where more and more people share their experiences (the good and the not so good) in real time, businesses and planners who can ride the wave of positive, customer-¬centric approaches will reap economic benefits.

Scroll through the population notes below and see if you don't find yourself one degree (or less) from someone who may benefit from the promising practices presented in this online guide. 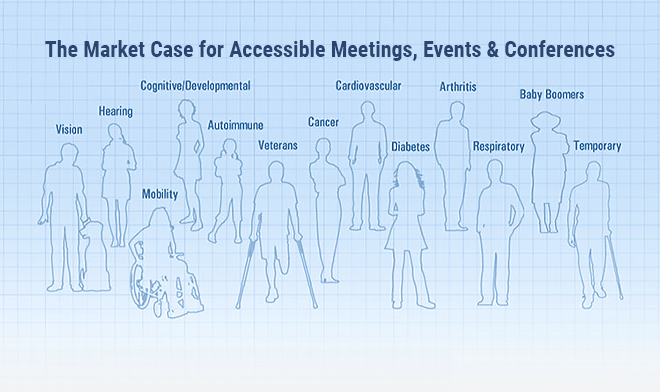 According to the U.S. Census, 57.6 million Americans reported having a disability in the 2010 American Community Survey (published July 2012). This number is just a fraction of individuals who would be better served by meetings and conferences that offered accessibility accommodations.

According to the 2012 National Health Interview Survey (NHIS) Preliminary Report, an estimated 20.6 million adult Americans (or nearly 10% of all adult Americans) either "have trouble" seeing, even when wearing glasses or contact lenses, or are blind or unable to see at all (source: the American Foundation for the Blind).

One in eight people in the United States (13%) aged 12 years or older has hearing loss in both ears, based on standard hearing examinations (National Institute on Deafness and other Communication Disorders).

According to the University of Kentucky Human Development Institute, there are approximately 8 million Americans who have some type of mobility impairment that necessitates the use of adaptive equipment such as a cane, crutches, walker, wheelchair, or scooter.

There are 60 million Americans nationwide with learning and attention issues (National Center for Learning Disabilities). The Journal of Pediatrics reports that one in six, or about 15%, of children aged 3 through 17 years have one or more developmental disabilities. The Centers for Disease Control and Prevention (CDC) Autism and Developmental Disabilities Monitoring (ADDM) Network reports that 1 in every 68 children in the U.S. has autism spectrum disorder (ASD).

The National Institutes of Health (NIH) estimate there are up to 23.5 million Americans with autoimmune disorders, including multiple sclerosis, lupus, rheumatoid arthritis, and more.

An estimated 80 million Americans have one or more types of heart disease (The Heart Foundation).

The CDC reports 29.1 million people with diabetes living in the U.S.

The CDC reports 6.8 million adults diagnosed with Chronic Obstructive Pulmonary Disease (COPD) in the past year, 8.7 million with chronic bronchitis, and 4.1 million with emphysema.

CNN reports 77 million Americans are part of the aging “Baby Boom” generation (born between 1946 and 1964). They represent roughly 24.3% of the total population.

Have you ever broken a limb? Recovered from surgery? Given birth? Experienced a perinatal condition such as high blood pressure or gestational diabetes? Been in a car wreck? Picture yourself here!

Used with permission of Mid-Atlantic ADA Center which
holds the rights to all content.
Accessibility  |   Checklist (PDF)